What is Google Chrome?

Google Chrome is a cross-platform web browser, developed by Google, first released in 2008 for Windows. It’s available on Linux, macOS, iOS, and Android as of now. In addition to fast browsing speed, the web sync feature on all devices via Google account is what makes it difficult for users to give up this browser.

Below you will find the features and changes to the latest Chrome versions.

So according to the set roadmap, Google has just officially released Chrome version 89 on March 2. The new update brings stronger integration and links between Android phones and Chrome OS, better support for in-browser gamepads, NFC for web apps, and native web sharing.

Let’s take a closer look at some of the notable improvements, changes and additions on this important update shortly.

In fact, Google has been developing “Phone Hub” for Chrome OS for a while now. This function basically works similarly to Microsoft’s “Your Phone” app on Windows 10, allowing you to link your Android device to Chrome OS and sync notifications and view recent tabs, etc.

Currently, Phone Hub can be manually enabled through the Chrome flag. A few people have seen this feature on Chrome 88 already, but it will definitely work better on Chrome 89. If you have installed and used Chrome OS 89, you can use this feature immediately. No need to activate anything extra.

WebHID is enabled by default

“WebHID” is an API developed to make keyboards and gamepads less standardized, better compatible with web browsers. It provides an efficient method to implement device-specific logic in JavaScript.

The browsers operate on the same HID protocol as the operating system. However, an uncommon HID device, such as a complex gamepad, may require separate custom logic to function properly in a browser. This API is now enabled by default, and you should see a marked improvement in everything involved.

The web app can use NFC

“Web NFC” will be officially enabled by default starting with Chrome 89 on Android. This means that web apps can now read and write NFC (Near Field Communication) tags. Usually, only native apps can do this. But with “Web NFC”, a web page can also scan and write NFC tags.

The above Google animation shows how a website interacts with an NFC tag using Chrome’s NFC Web API.

To allow users to easily share content on social networks, developers have manually integrated share buttons into the website. You often see buttons to share social media links on websites where by clicking on it, the content you have just interacted with can be shared on the respective social networking sites. This is a useful feature, but its drawback is that users will be limited to only sharing content on certain websites listed. 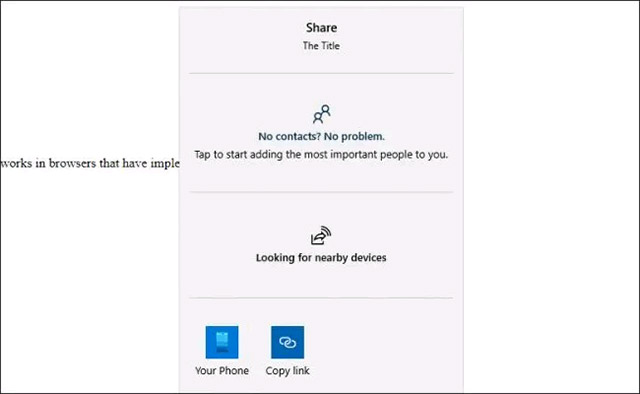 However, this drawback will be partially overcome on Chrome 89. The new Chrome update brings Android’s rich web sharing feature to Windows and Chrome OS platforms. Web pages can now use Navigator.share () on the desktop to activate the sharing dialog. If a website supports new web sharing, tapping the share button will open the original sharing menu. That way, you can share the link with any app on your device that supports it, instead of being limited to just one Facebook and Twitter button like before.

Discontinued support for some older processors

This is not a problem for the majority of devices running Chrome 89 today. Microprocessors have supported SSE3 for almost 15 years. But if you happen to own one of those very old devices, you’ll be stuck on Chrome 88.

Chrome has been supporting Windows 10’s system-wide dark mode theme for a long time. But for Chrome 88, everything will become more comprehensive and optimal. For example, a dark background will be applied to the scroll bar area on many internal Chrome pages, including Settings, Bookmarks, History, New Tab Page, and more. 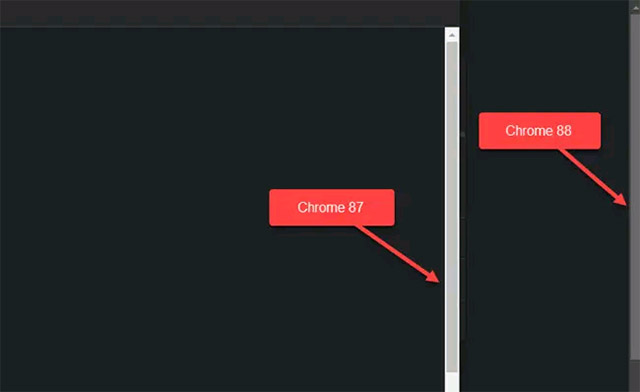 No more FTP in Google Chrome

Starting with this version, Google Chrome no longer supports FTP URLs, in other words the ftp:// address.

FTP inherently does not support encrypted connections (without FTPS). Thus, it is possible for an attacker to intervene, modifying files that you are downloading in transit, unlike encrypted HTTPS or FTPS. Chrome and other browsers are moving to support an always-encrypted web, so it’s a good idea to get rid of old protocols like this.

In fact, Google has been planning to gradually remove FTP from Chrome for a while. Google’s statistical data shows that currently very few people use FTP. With support for this protocol omitted, if you want to use FTP from now on, you will need a separate application.

Google will officially stop supporting Mac OS X 10.10 Yosemite in Chrome 88. Mac users will need OS X 10.11 El Capitan or later to use Chrome 88. This has been previously reserved by Apple itself. also ceases to support Mac OS X Yosemite since 2017.

On Chrome 88, Google is experimenting with a less obtrusive method of requesting access to user data. For example, instead of displaying a large window, obscuring the content on the screen as before, Chrome will only display a small message appears to the left of the URL.

First, this message may appear with full text like “Use Your Location?” (Use your location?) After a few seconds, it collapses to a small icon, appearing as a blue oval icon. Clicking that brings up the authorization prompt, which you normally see.

You can experiment with this change by activating the flag at chrome://flags/#permission-chip.

Tested a light and dark theme for Chrome OS

Google is testing light and dark themes that are better tuned and compatible for Chromebooks. Themes can be switched from the quick settings menu, and applied both across the interface of important system items like Shelf, App Launcher, and Quick Settings. However, due to being in the finalization process, it is difficult for everything to work perfectly right now. If you want to try this feature on a Chrome OS system, you can enable the flag at chrome://flags/#dark-light-mode. After restarting the system, you will see the Theme switch button appearing in Quick Settings.

Chrome 87 brings a handy Tab Search feature for Chromebooks, but it’s not available to Google on Windows, Mac, or Linux. Chrome 88 will Tab Search to these PC operating systems via a Chrome flag.

When the flag is enabled, you’ll see a drop-down arrow in the top tab bar that shows all your open tabs. You can then use the built-in search bar to find the tab you want to visit.

To experience this feature in Chrome 88, turn on the Tab Search flag at chrome://flags/#enable-tab-search.

Google has just officially launched Chrome version 87. This is considered the biggest update of Chrome’s performance in recent years.

Performance improvements for tabs running in the background

After analyzing what kind of resources the running tabs use, Google found that JavaScript Timers uses more than 40% of the resources. So, in this new version of Chrome, Google increases the performance of the computer by only allowing JavaScript Timers to wake up and perform one task per minute.

According to Google, this adjustment reduces CPU usage by 5 times and extends the device’s battery life by 1.25 hours. In addition, Chrome 87 also adds Occlusion Tracking, which can be used to track which tab is in use and the browser will only allocate resources to that tab.

With these improvements, Google says Chrome boots up up to 25% faster and loads 7% faster pages while using less RAM.

With the new Chrome version, Google gives Android users the feature of Caching Back / Forward. This feature will cache the state of previous web pages, including JavaScript memory, in a cache so that you can display the exact position you are viewing when you press the back button.

This feature significantly improves the user experience, especially those who use low-cost or poor internet speed.

FTP support is disabled by default

In November 2018, Google planned to remove FTP support on Chrome when only 0.1% of users visited FTP sites within 7 days. On Chrome 80, Google tested disabling FTP support for 1% of users. However, due to pandemic reasons, this feature has been re-enabled so users can easily access medical information.

With Chrome 87, Google officially disables FTP support by default. Therefore, users will no longer be able to access ftp:// sites. If you need access, you can re-enable FTP support by visiting chrome://flags/#enable-ftp, but later on Chrome 88, the FTP support feature will be removed completely.

The holes have been patched

On Chrome 87, Google fixed the Slipstream vulnerability discovered by security researcher Samy Kamkar. Slipstream allows the attacker to bypass the NAT/firewall and access any TCP / UDP ports on the victim’s computer.

Chrome 87 also fixes many other vulnerabilities, but Google has not released a detailed report.

Google has just released version 86 for the Chrome browser with many improvements to security, features and developer APIs.

Increased security on Android and iOS

Google released the “Safety Check” feature for Chrome from version 83, but it wasn’t until version 86 that it made its way to Chrome for mobile devices. With this feature enabled, Android users get real-time protection while surfing the web and downloading files.

Google says “Safety Check” has helped reduce the number of users being scammed by 20%.

Chrome users on iOS are also getting enhanced security when version 86 adds biometric authentication when auto-fill in saved passwords is enabled.

Mixed content is files or data delivered over an insecure HTTP connection when first initialized from HTTPS sites. With Chrome 86, Google blocked the download of mixed content with executable and archive file formats including .exe, .apk, .zip, .iso…

When Chrome intentionally downloads these issued files, Chrome sends a message stating that the file (.exe) cannot be securely downloaded.

Besides, Chrome 86 will also warn users when they upload mixed content. Google will then give you the option to cancel the upload or continue the upload.

On Chrome 86, Google has fixed a number of security holes. However, the list of vulnerabilities is not published.

Besides the official features, Google also added Chrome 86 some other experimental features.

To experiment with new features, you can visit chrome://flags